PEK Jun Wei received his B.Sc. (Hons) (2008) and Ph.D. (2011) from the National University of Singapore (NUS). He did his graduate research in the laboratory of Dr. Toshie Kai at the Temasek Life Sciences Laboratory (TLL) where he studied the roles of nuage and small RNAs in the Drosophila germline. In 2012, he joined the laboratories of Drs. Joseph Gall and Allan Spradling at the Carnegie Institution for Science (Department of Embryology) as a Carnegie Collaborative Fellow. He developed a research program to study a novel class of noncoding RNAs (stable intronic sequence RNAs or sisRNAs) in Drosophila. He was later named a Howard Hughes Medical Institute (HHMI) Fellow of the Life Sciences Research Foundation and awarded a fellowship from the Jane Coffin Childs Memorial Fund. He returned to TLL as a Young Investigator in November 2014 to start his independent research group.

You may wish to contact Dr PEK Jun Wei at:

For information on PhD studies at TLL, click HERE

Noncoding RNAs (ncRNAs) have emerged as potent agents for gene regulation during normal development and in diseases such as cancer. Introns are widely considered as junk sequences interspersed between coding exons in genes of eukaryotes and viruses. Recent studies have identified various forms of stable intronic sequence RNAs (linear and circular) that belong to a novel class of long ncRNAs that regulate gene expression (Pek and Okamura 2015; Osman et al., 2016; Pek 2018). Our group has discovered many sisRNAs in Drosophila, and showed that sisRNAs engage in regulatory feedback loops and play important roles in stem cell homeostasis and development (Pek 2018). sisR-1 functions in a negative feedback loop in repressing its parental gene for proper germline stem cell maintenance in the ovary (Figure 1) (Pek et al., 2015; Wong et al., 2017). 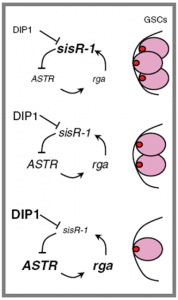 Figure 1. A model for the regulation of GSC–niche occupancy by sisR-1 feedback loop.

On the other hand, sisR-4 is a maternally-deposited circular sisRNA that promotes the expression of its parental gene that is essential for embryonic development (Figure 2) (Tay and Pek 2017). 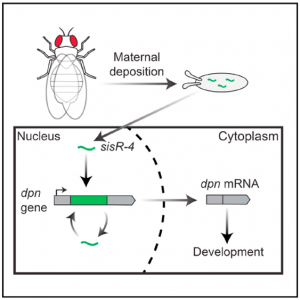 Figure 2. A model of how maternally inherited sisR-4 can trigger a self-amplification loop in the expression of dpn to achieve robust embryonic development in Drosophila. 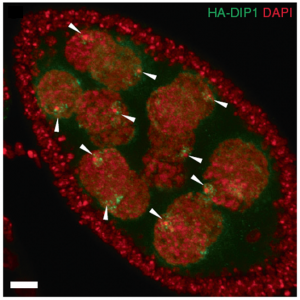 Interestingly, satellite bodies localize to regions of high sisRNA production, suggesting that they are involved in sisRNA metabolism in the nucleus. Currently, we are investigating the composition and molecular function of satellite body. Recent studies have shown that the roles of sisRNAs in regulatory feedback loops are conserved in cancer tissues. We are currently extending our research on sisRNA/ncRNA to cancer with an emphasis on prostate cancer. We will focus on 3 main aspects: 1. Molecular mechanisms, 2. Novel biomarkers, and 3. Disease modelling in Drosophila.