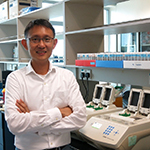 Ong Chin Tong obtained his bachelor in Cell and Molecular Biology from the National University of Singapore (NUS). He received his Ph.D. in Developmental Biology from Washington University in St Louis where he studied Notch transcriptional regulation under Raphael Kopan. He continued his postdoctoral training with Victor Corces at Emory University where he studied the gene regulation by 3D genome organization. He joined Temasek Life Sciences Laboratory (TLL) as a Principal Investigator in Nov 2014 to study epigenetic regulation of aging and Alzheimer’s disease.

You may wish to contact Dr ONG Chin Tong at:

Research Projects Background and significance Alzheimer’s disease (AD) is a devastating neurodegenerative disorder characterized by long asymptomatic preclinical phase. AD remains incurable due to late detection, where toxic accumulation of amyloid plaques, neurofibrillary Tau tangles and inflammation have caused irreversible damages to the brain. It is therefore crucial to find early diagnostic markers that can reliably predict the possibility of AD occurrence before clinical manifestation of dementia.

How DNA methylation can be fine-tuned in locus-specific manner  Epigenome-wide association studies showed that changes in the DNA methylation patterns at specific AD-linked genetic loci may predict the occurrence and severity of AD. Understanding what regulates these changes may provide insights into the mechanisms that trigger AD pathology during aging. We found that the DNA demethylase activity of TET3 is regulated by phosphorylation during neurogenesis (Figure B) (Rao et al., 2020). We aim to uncover other mechanisms that regulate the level of DNA methylation at specific genetic loci in the context of aging and AD.

Epigenetic regulation of aging Aging is the major risk factor of late-onset sporadic AD. We use Drosophila as a model system to identify the epigenetic mechanisms that regulate organismal aging to uncover potential pro-longevity targets.