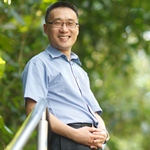 Hao Yu received his Bachelor and Master degree from Shanghai Jiao Tong University (P.R. China) in 1994 and 1997, respectively, and Ph.D degree from National University of Singapore (NUS) in 2001. After two years of post-doc training in California Institute of Technology, he joined the Department of Biological Sciences, NUS, as an Assistant Professor in January 2004, and joined Temasek Life Sciences Laboratory (TLL) as a Principal Investigator in September 2004. He was promoted to Associate Professor in NUS in 2008 and to Senior Principal Investigator in TLL in 2009.

You may wish to contact Prof Hao YU at:

Clarification of genetic networks during floral transition in Arabidopsis Among the multitude of developmental phases in plants, the one which brings transition from vegetative to reproductive stage is the most exciting and complex one. We have found the important function of a putative transcription factor, AGAMOUS-LIKE 24 (AGL24), in the genetic crosstalk among the gene loci involved in the control of flowering time. The level of AGL24 mRNA expression is corresponding to the alteration of flowering time in that overexpression of AGL24 causes early flowering, while reduction of AGL24 expression causes late flowering. Molecular and genetic studies also suggest the involvement of AGL24 in several floral inductive pathways. Now we are establishing a chromatin immunoprecipitation (ChIP) system and a hormone inducible system for identifying direct downstream targets of AGL24. This series of studies aim to clarify the transcriptional hierarchy involved by AGL24 during floral transition in Arabidopsis.

Investigation of the involvement of GA signaling pathway in floral development Gibberellin plays an important role in many aspects of plant growth and development, such as seed germination, stem elongation and floral development. It has been recently proposed that GA may regulate many developmental processes by regulating five DELLA domain-containing GRAS regulatory proteins in the signaling pathway. Now we are using TAP and other tagging systems to purify the protein complex involved by DELLA regulators. In addition, we are performing microarray experiments to detect downstream genes of DELLA proteins with established DELLA protein-inducible systems. The purpose of this project is to investigate the GA signaling pathway involved in the control of flowering time and floral organ development.

Characterization of orchid genes during flowering process Orchids are the most popular cut flowers in the floral trade in the countries of Southeast Asia. In particular, Singapore is the second major countries in the world in terms of the export of orchid cut flowers. However, traditional genetic breeding and culturing of orchids by conventional ways are not able to match the rapidly increased demand for orchid variety and production. We have created a genetic transformation system for a Dendrobium orchid via Agrobacterium tumefaciens. By using this system, now we are investigating a series of developmental genes involved in orchid flowering process. This study will contribute to the improvement of genetic manipulation of orchid genes to change important traits in orchids.