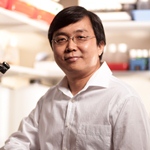 YU Fengwei received his PhD degree at Institute of Molecular and Cell Biology (IMCB), Singapore in 2003. Immediately after that, he joined Temasek Life Sciences Laboratory (TLL) to establish his independent research group. He was awarded the National Young Scientist Award as the sole winner in the biomedical category for his breakthrough research on neural development and neurological disorders in 2007. He is also an adjunct Associate Professor in Department of Biological Sciences (DBS/NUS), a supervisor in NUS Graduate School for Integrative Sciences and Engineering (NGS/NUS), and Singapore Graduate Programme in Neuroscience (SGPN).

You may wish to contact Dr Fengwei YU at:

My group is interested in understanding developmental, cellular and molecular mechanisms of neuronal pruning and remodeling using a powerful model organism, Drosophila melanogaster or Fruit Fly. A dramatic decrease in neuronal connections, known as neuronal pruning, occurs in adolescent human brains, in response to a robust increase in levels of steroid hormones such as thyroid and sex hormones. Perturbation of the neuronal network maturation may cause some psychiatric disorders, for example, schizophrenia, a disorder associated with excessive pruning occurring in the brain cortex. Hence, adolescence, a transition stage between childhood and adulthood, is the peak age of onset for human psychiatric disorders, during which remarkable physical and behavioral changes take place.

Working with fruit flies, an excellent genetic organism, my group has identified novel factors and genetic programs that control the initiation of neuronal pruning in a certain type of sensory neurons during Drosophila metamorphosis, a transition stage between larval and adult forms. The onset of fly metamorphosis is triggered by a pulse of systemic steroid hormone ecdysone during the larval-pupal transition. Strikingly, similar to the remarkable changes happening in human brains during adolescence, unnecessary larval neuronal processes of the fly nervous system are selectively removed through retraction or degeneration.

My group has identified a novel genetic pathway composed of two key ecdysone response factors: a transcription factor Sox14 and a cytoskeletal protein Mical. sox14, an early ecdysone hormone response gene, serves as a temporal trigger of neuronal pruning by directly activating its critical downstream target gene, mical. These breakthrough findings have been published in Nature Neuroscience in 2009. Furthermore, we systematically analyzed almost all Drosophila epigenetic factors, from which a Brahma-containing chromatin remodeling complex and a histone acetyltransferase CREB-binding protein (CBP) were identified for their critical roles in neuronal pruning (Neuron, 2011). Interestingly, both Brahma and CBP specifically activate the expression of Sox14 by enhancing the levels of histone acetylation in the vicinity of the sox14 gene. Thus, specific epigenetic factors cooperate with systemic steroid hormones to alter chromatin states and selectively activate critical downstream programs that are required for the maturation of the nervous system. Given the existence of sox14, mical, brahma and CBP-related genes in humans, their functions might be important for the pruning and maturation of the nervous systems during adolescence. Encouragingly, administration of antipsychotic drugs that regulate histone acetylation levels could attenuate schizophrenia-like behavioral abnormalities in mice. Hence, our studies will pave the way for future study of these human genes in the context of psychiatric disorders. 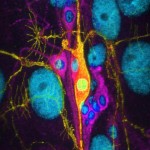 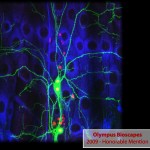 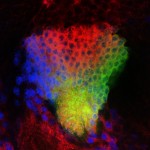 A dorsal cluster of sensoryneurons in Drosophila

Sensory neurons arborize their dendrites on the epithelium

A cluster of mushroom body neurons in Drosophila brain